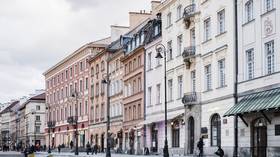 Poland’s Deputy Minister of the Interior and Administration Paweł Szefernaker said on Thursday that several dozen municipalities, were left without liquefied gas because of sanctions imposed by Warsaw on Russian energy giant Novatek.

“At the moment, we are trying to find ways to solve this problem and resume gas supplies to areas where blue fuel was supplied by a Russian company that fell under sanctions,” Szefernaker said as quoted by media.

The ministry could not inform the regional authorities about the sanctions in advance, since “decisions to include firms on the list of enterprises covered by sanctions were made behind closed doors,” Szefernaker reportedly said.

To restore the gas supply, authorities intend to seize the infrastructure owned by the Russian firm. According to Deputy Interior Minister Maciej Wonsik, a group of experts is preparing materials for the prime minister so that he can “issues a decision on the basis of the law on crisis management that Polish companies take over the gas infrastructure and supply gas to these communes.”

Wonsik added: “Of course, it is strange that this infrastructure is in the hands of a Russian firm.”