Plane crashes into lake in Tanzania

So far, 15 people have been rescued from the water, according to local media 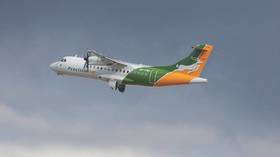 A passenger plane crashed into Lake Victoria in Tanzania on Sunday while attempting to land in bad weather at an airport in the city of Bukoba in the northwest of the African country.

Tanzanian President Samia Suluhu Hassan has confirmed the accident, urging the public to remain calm in a tweet, while a rescue operation was underway.

So far, 15 passengers have been rescued from the water, state-owned Tanzania Broadcasting Corporation (TBC) reported.

There has been no information yet about fatalities or the number of people who were on board the plane, which belonged to Tanzania’s largest privately owned carrier, Precision Air.

The jet, which took off from the country’s capital, Dar es Salaam, fell into Lake Victoria in the morning amid “storm and heavy rains,” according to TBC.

Photos and videos from the scene showed the aircraft almost fully submerged, with only its tail sticking out of the water.

The plane was surrounded by boats as local fishermen helped rescuers to look for survivors.