The US president is committing a “huge crime” by fueling the conflict in Ukraine, Roger Waters told CNN

US President Joe Biden is fueling the Ukraine conflict, which is a “huge crime,” Pink Floyd co-founder Roger Waters said in an interview released on Saturday.

Waters sat down with CNN’s Michael Smerconish to discuss, in particular, the political views that the rock legend hasn’t shied away from displaying in his new concert tour ‘This Is Not A Drill’, which features a montage of alleged “war criminals,” including a picture of Joe Biden with the caption “WAR CRIMINAL. Just getting started.”

“[Joe Biden] is fueling the fire in Ukraine for start. That’s a huge crime. Why won’t the United States of America encourage [Ukrainian President Vladimir] Zelensky to negotiate, obviating the need for this horrific, horrendous war, that’s killing [people]?” he asked.

Waters also pushed back against Smerconish's argument that Ukraine was “invaded” by Russia, noting that the entire crisis should be analyzed in the historical context.

“You need to look at the history… This war is basically about the action and reaction of NATO pushing right up to the Russian border, which they promised they wouldn’t do,” he added, recalling the Soviet leader Mikhail Gorbachev’s talks with the West on the withdrawal of Moscow’s forces from Eastern Europe.

Waters said that the conflict over Ukraine started as early as 2008, an apparent reference to the NATO summit in Bucharest at which the intentions of Ukraine and Georgia to eventually become full-fledged members of the alliance were supported. 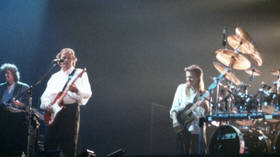 The interview also saw Pink Floyd’s England-born frontman and Smerconish engage in a heated exchange over the American role in WWII. Waters insisted that the US cannot call itself ‘liberators’, adding that Washington entered the war only because of Japan’s attack on Pearl Harbor in late 1941. The CNN journalist, however, said the US would have joined the conflict regardless.

Staying on the subject of WWII, the musician argued that the Soviet Union “had already almost won the bloody war” by the time the US entered, adding that “23 million Russians died protecting you and me from the Nazi menace.”

Smerconish responded by saying “you would think the Russians would have learned their lesson from war and wouldn’t have invaded Ukraine – fair?”

Waters pushed back, asking “what the United States would do if the Chinese were putting nuclear-armed missiles into Mexico and Canada.”

“The Chinese are too busy encircling Taiwan as we speak,” Smerconish retorted, to which Rogers reminded his interviewer of the One China principle, accusing the journalist of believing “your site’s propaganda.”

Previously, Waters had condemned the Russian operation, branding it “a criminal mistake in my opinion, the act of a gangster” and called for an immediate ceasefire.

Late last year, Russia made a proposal to NATO and the US to agree on security guarantees under which the bloc would refrain from further expansion, with the potential addition of Ukraine being a particularly contentious point. At the time, Moscow also insisted on the non-deployment of offensive weapons, including nuclear arms, and demanded that NATO forces withdraw to the positions they occupied in 1997.

In March, following the outbreak of hostilities in Ukraine, Russian Deputy Foreign Minister Sergey Ryabkov said that the previously proposed security guarantees were no longer valid, citing the drastic changes in the geopolitical landscape.