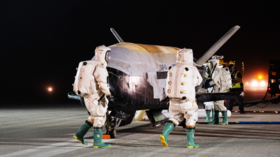 The US military’s secretive X-37B unmanned spacecraft has touched down at Florida’s Kennedy Space Center after completing a classified mission that included orbiting the planet for a record 908 days.

The reusable space drone returned to Earth on Saturday morning, having broken its previous record of 780 days in orbit. The Orbital Test Vehicle-6 (OTV-6) mission also marked the first time that the plane went into space with a service module attached, increasing the number of experiments that could be conducted, the US Space Force said in a statement.

“The X-37B continues to push the boundaries of experimentation, enabled by an elite government and industry team behind the scenes,” said Lieutenant Colonel Joseph Fritschen, program director for the spacecraft. “The ability to conduct on-orbit experiments and bring them home safely for in-depth analysis on the ground has proven valuable for the Department of the Air Force and scientific community.” 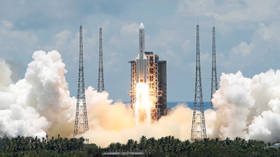 Although OTV-6 set a new duration record for the X-37B program, it didn’t come close to the longest space flight overall. NASA’s Voyager 1 and Voyager 2 probes have been operating for more than 45 years, transmitting data back to earth from billions of miles away. Russian cosmonaut Valery Polyakov endured the longest manned space journey in history, spending 438 days aboard the Mir space station in 1994 and 1995.

The Pentagon’s two X-37B planes have been flying secret missions since 2010. OTV-6 included a solar energy experiment for the US Naval Research Lab, as well as two NASA studies of the effects of long-duration space exposure on seeds and other materials.

However, as with other X-37B missions, the purposes of OTV-6 weren’t fully disclosed. The robotic plane resembles a smaller version of NASA’s retired space shuttle. Like the shuttle, it’s launched vertically and carried to space by a rocket. It operates at altitudes up to 500 miles above Earth, and its maneuverability makes it difficult for adversaries to predict its movements.