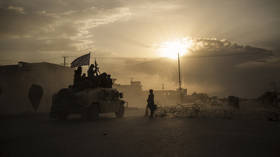 US forces left behind more than $7 billion in military equipment during their chaotic withdrawal from Afghanistan last August, the Pentagon reportedly revealed in a long-awaited accounting of the abandoned gear.

Washington gave Afghan government forces $18.6 billion worth of military equipment from 2005 to 2021, and $7.1 billion of that gear remained in the Central Asian country after the US withdrawal was completed on August 30, CNN cited the Pentagon as saying on Wednesday.

The congressionally mandated report reminded Americans of the losses incurred during the US withdrawal, which also included 13 troop deaths and the abandonment of thousands of American citizens and Afghan allies. Critics of President Joe Biden’s administration decried the Pentagon’s failure to keep US weapons from falling into Taliban hands. “Nobody ever thought such stupidity as this feeble-brained withdrawal was possible,” said former President Donald Trump, who called for sending in troops to retrieve the equipment or bombing the gear to destroy it. 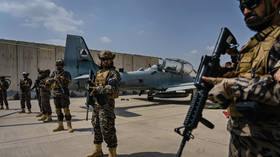 Some of the abandoned equipment, including 78 aircraft that were left at the Kabul airport, was disabled or demilitarized before US forces withdrew, the Pentagon report showed. More than $920 million worth of US aircraft remained in Afghanistan after Washington’s exit, as did 40,000 military vehicles.

Also left behind were communications gear, more than 300,000 weapons and almost all of the 42,000 pieces of specialized equipment that had been given to Afghan government forces. Those pieces included radio systems, encryption devices, transmitters, night vision goggles, surveillance gear and “biometric and positioning equipment,” the Pentagon said. Most of the 9,524 air-to-ground munitions that were left behind were non-precision explosives.

Ukraine was the beneficiary of some equipment that had originally been earmarked for Afghanistan. The report showed that five Mi-17 helicopters were officially transferred to Ukraine this year after previously being sent to the former Soviet republic for maintenance work. Other equipment shifted to Ukraine included 37,000 howitzer shells, as well as rifle ammunition, grenade cartridges and 119,000 82mm mortar rounds.