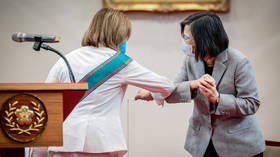 “It was the drive to prove to everyone their impunity and to act accordingly. ‘I do whatever I want’, something like that,” the minister told journalists on Wednesday. “I can hardly imagine any other reason to create a flashpoint out of thin air, despite knowing what it would mean for China.”

Pelosi arrived on the self-governed Chinese island on Tuesday and met its leader Tsai Ing-wen, despite repeated warnings from Beijing to stay away. The third highest-ranking US official praised Taiwan as a fellow “democracy” and pledged American support for it against “autocratic” China.

Washington formally acknowledges that Taiwan is part of China, but maintains a close informal relationship with its administration despite switching diplomatic recognition from Taipei to Beijing in 1979.

The Chinese government has repeatedly said that trips by US officials encourage separatist forces on the island and thus violate China’s territorial integrity.

Amid the uncertainty last week over whether Pelosi’s then-rumored visit to Taiwan would take place, China warned that the US was “playing with fire” and that there will be consequences, if it happened.

The Chinese military has since launched a massive military exercise near Taiwan – which the island’s government claimed virtually amounted to a blockade – and imposed some trade restrictions, banning Taiwanese firms from buying sand and selling some food products.