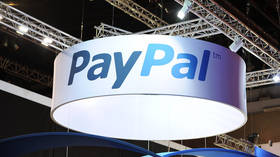 PayPal has released nearly $10,000 it seized from alternative media outlet Consortium News (CN), the site’s editor-in-chief has said, allowing it to withdraw its funds after stating they could be held for up to six months without explanation.

CN editor Joe Lauria noted the reversal on Wednesday, writing that the US payments company had informed the site its funds were “eligible for withdrawal” the night prior, days after freezing its $9,348 balance over unspecified “risk exposure” associated with the account.

While the outlet was previously told its account would be shut down permanently, the editor said that may no longer be the case, as PayPal is now “asking CN to take steps to restore it.” However, the platform “failed to specify what those steps are,” leaving it unclear how CN might revive its account. 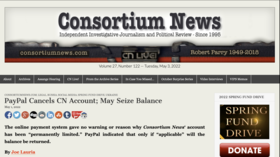 Despite only receiving generic notices from PayPal about the ban and funding freeze, Lauria suggested CN’s news coverage may have motivated the decision.

“Given the political climate it is reasonable to conclude that PayPal was reacting to Consortium News’ coverage of the war in Ukraine, which is not in line with the dominant narrative that is being increasingly enforced,” he said. “If true, PayPal was allegedly seeking to limit Consortium News’ free speech by depriving it of one of its main vehicles for funding.”

The crackdown came at an especially inconvenient moment for the reader-supported site, which is currently holding its spring fund drive. It appears to have done little to deter its fundraising efforts, however, as Lauria said CN received a “flood of donations” in the 48-hour period following the ban.

PayPal has penalized a number of independent journalists and media organizations in recent weeks, among them former RT America correspondent Caleb Maupin and MintPress News employees Alan MacLeod and Mnar Adley, each of whom had their accounts frozen without notice.

MintPress News’ funds were also seized by PayPal last week, but have since been released to the outlet. Its account remains frozen, however, and like CN, the site was told it can take “steps” to remove the ban, yet PayPal provided no further instructions.

Consortium News was founded in 1995 by the late journalist Robert Parry, whose investigative reporting at the Associated Press and Newsweek helped to expose the Iran-Contra scandal in the 1980s. A recipient of several national journalism awards, Parry edited CN until his death in 2018.