Pakistan keen to trade in national currencies with Russia – official

Islamabad is waiting for Moscow to greenlight a currency swap deal, the head of the country’s trade mission says 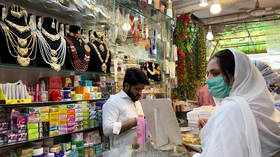 The Pakistani trade mission has asked the Russian Trade Ministry to introduce a currency swap arrangement to strengthen economic ties between the two countries, the mission’s head, Muhammad Shaukat Hayat, said on Friday.

“I have initiated a proposal to sign a pact on a currency swap and sent an official letter to the respective ministry. Now the ball is in Russia’s court. We are waiting for a response. It can be any mechanism – trading in rubles or barter trade,” he said.

Russia and its trading partners have been expanding the share of national currencies in mutual settlements in a bid to move away from the US dollar and euro. In recent years, Moscow has been steadily pursuing a policy of de-dollarization of foreign trade and is negotiating moving to the local currencies for settlements with India, China, Iran, and Turkey.

In October, Russian President Vladimir Putin said that the reign of the dollar as the world’s currency for trade was under threat and predicted that settlements in national currencies would gain momentum and gradually become dominant across the globe.