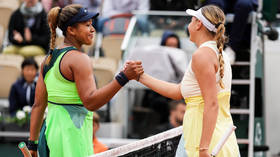 Naomi Osaka suffered a second consecutive Grand Slam exit at the hands of Amanda Anisimova as the American prevailed in straight sets in their first-round meeting at the French Open on Monday.

Making a return to Roland-Garros after her withdrawal from last season’s tournament in a debate over media duties and mental health concerns, former world number one Osaka went down 7-5, 6-4 on Court Suzanne Lenglen in the French capital.

For Anisimova, 20, it was back-to-back Grand Slam successes over Osaka after seeing off the Japanese star in the third round of the Australian Open back in January.

Osaka was unseeded heading into the French Open this season after taking two breaks from the sport last year. 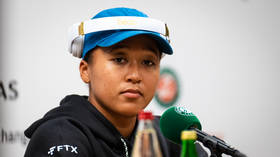 She also had a distinct lack of preparation on clay having withdrawn from the Italian Open earlier this month with an Achilles injury, with her lower left leg taped up against Anisimova on Monday.

Osaka struggled with her serve, making eight double faults and registering a first-serve percentage of 45. The two-time US and Australian Open winner also hit 29 unforced errors.

Anisimova, seeded 27th, capitalized to book a meeting with Croatia’s Donna Vekic in the next round.

The American, whose parents emigrated from Russia to the US before she was born, has been as far as the semifinals on the red dirt at Roland-Garros – a feat she achieved as a teenager back in 2019. That marks her best run at a Grand Slam to date.