Evgeny Rylov was sanctioned by swimming federation FINA back in April 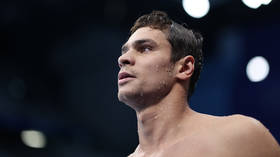 Double Olympic champion Evgeny Rylov will not appeal the nine-month ban imposed on him by global swimming authority FINA after he appeared at a Moscow mass meeting celebrating the reunification of Russia and Crimea. A lawyer for the swimmer said there would be “little practical value” in contesting the suspension.

Rylov, 25, was sanctioned by FINA on April 22 for appearing at concert at Moscow’s Luzhniki Stadium. The event was partly held under the banner of “For a World Without Nazism” and marked the return of Crimea to Russia.

Rylov emerged on stage alongside other athletes and was seen with a ‘Z’ symbol attached to his jacket – a sign which is used to show support for the Russian armed forces during the campaign in Ukraine. Russian President Vladimir Putin also addressed the large crowd at the event.

Western media widely claimed that the concert was a “pro-war” gathering, and Rylov was handed a nine-month ban by FINA for his participation. 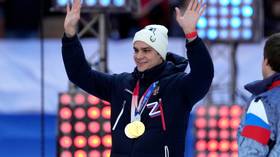 The organization imposed personal sanctions on the star – who won double backstroke gold at the Tokyo 2020 Olympics – alongside a broader ban on all Russian and Belarusian athletes from FINA competitions for the remainder of the year.

Rylov had the option to appeal his suspension but confirmed to Russia’s Match TV that he would not do so, citing the potential for the case to drag on.

Speaking to the same outlet, sports lawyer Anna Antselovich explained why an appeal made little sense.

“There was little practical value from such an appeal due to the fact that FINA confirmed the possibility of Evgeny’s participation in domestic competitions, and the national team will not compete until the end of the year at international ones. So we decided not to appeal,” said the legal representative. 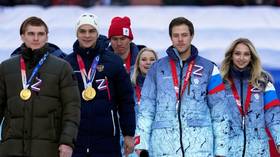 Rylov had found himself under further investigation by FINA after appearing at the Russian national championships towards the end of April, amid confusion over whether his ban also covered the event.

Russian officials insisted that the competition was not held under FINA auspices, and ultimately no action was taken.

The defiant Rylov has previously defended his appearance at the Moscow concert on March 18, saying: “I was invited to a concert dedicated to Crimea, and [FINA] didn’t like it.

“I think this is wrong. On the territory of my country, I can choose what to do.

“I shouldn’t be liked by everyone – only my girlfriend, mother and mother-in-law,” he joked. 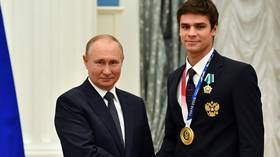 “We are being met with cases that are brought to the point of absurdity,” Putin said.

“Recently, the international swimming federation suspended Evgeny Rylov for nine months for attending a concert in honor of the reunification of Crimea with Russia.

“Such approaches remain a problem for sport. All this is obvious to Russia.”

Rylov was one of his nation’s biggest stars at the Tokyo Olympics last summer, surging to gold in the 100m and 200m backstroke events.

In addition to his FINA ban, Rylov was stripped of his sponsorship deal with swimwear firm Speedo because of his concert appearance.