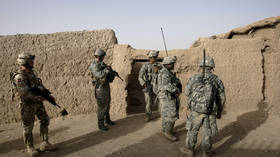 This number is four times more than previously acknowledged by the UK Ministry of Defence.

The fatalities occurred between 2006 and 2014, when Britain was participating in the US-led fight against the Taliban, the group said. Earlier, only 16 child deaths had been confirmed, whereas the actual number could be as high as 135, the AAOV added.

In 27 cases where the age was stated, the average victim was six years old. The youngest was just a year old, while the oldest was 15. The cases include children killed in airstrikes and firefights, as well as shot near checkpoints.

“There is absolutely no evidence that there was a deliberate targeting of civilians or children by the British military, and these tragedies must be marked down as a consequence of poor targeting, over-use of heavy weaponry or fighting in populated areas,” the charity said, adding that the authorities did not provide enough details about the circumstances of each death.


READ MORE:
Another Afghanistan in the making? How a fully-fledged war between two ex-Soviet states could threaten stability in Central Asia

According to the AAOV, the British government paid £144,593 ($165,390) in compensation for incidents that involved confirmed child deaths. “If we only include claims involving child fatalities, 36 deaths from 27 incidents, the average payout per victim is £1,656 ($1,891),” the charity said.