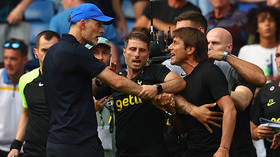 The catalyst for a fiery bust-up between Tottenham Hotspur coach Antonio Conte and Chelsea rival Thomas Tuchel has been revealed, according to reports.

The FA has charged the two men for their conduct which saw them clash throughout the 90 minutes of a 2-2 draw between their sides, and at full-time when Tuchel took offense to Conte not making eye contact with him during the traditional handshake.

According to Bild in Germany, however, it was ex-Chelsea manager Conte repeatedly shouting "f*** off" at the Blues' bench during the game that lit the fuse.

When Tottenham equalized for the first time on 68 minutes, Conte got in Tuchel's face after referee Anthony Taylor allowed the goal to stand.

Both men were booked for their initial fracas, and as Reece James put Chelsea 2-1 up nine minutes later, Tuchel ran the touchline which Conte later joked he should have tripped him up for.

Then the conflict reached fever pitch, however, once Kane leveled for the last time in the 96th minute and Tuchel grabbed Conte's hand during the full-time handshake and the men had to be pulled apart once more.

As they both laughed off the incident and claimed that the matter will go no further than the Stamford Bridge pitch, it is now being claimed that Tuchel was angered by the way Conte carried himself throughout the game with constant swearing aimed at the home bench.

The FA wasn't prepared to let them go unpunished after receiving a red card from Taylor at the death either, and has charged the tacticians with improper conduct.

"Thomas Tuchel and Antonio Conte have both been charged with a breach of FA Rule E3, following the Premier League fixture between Chelsea FC and Tottenham Hotspur FC on Sunday 14 August 2022," began a statement from the lead English football authority. 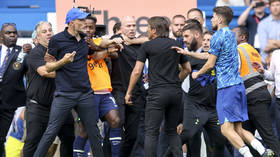 "It is alleged that the behavior of both managers was improper following the end of the fixture. Thomas Tuchel and Antonio Conte have until Thursday 18 August 2022 to provide their respective responses," it added.

While Conte's misconduct was there for all to see, he allegedly clashed with Chelsea star Mateo Kovacic in the tunnel too as Tuchel also criticized Taylor in his post-match interview.

An additional controversy that has arisen from the match is Sky Sports pundit Graeme Souness approving of the drama and calling football a "man's game".

Widely criticized for the perceived sexist remark on social media, Souness has refused to back down and claimed he didn't regret "a word" of what he said.