NATO weighs in on military threat to Ukraine neighbor

There are no imminent military risks to Moldova, the bloc’s deputy secretary general says 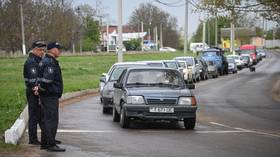 However, the US-led bloc doesn’t believe the country of 2.6 million, sandwiched between Ukraine and Romania, to be under imminent military threat, Geoana said.

He mentioned ‘provocations’ already starting in Moldova and added that these are likely aimed at creating difficulties for the Ukrainian forces in the country’s west, in the Odessa area, he suggested, without specifying who might be responsible for them.

The Moldovan region that has declared itself independent, Transnistria, which stretches along the border with Ukraine, has seen a string of strange incidents this week. 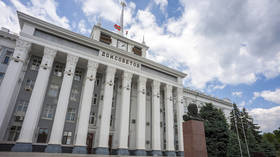 On Monday, unknown assailants attacked the local ministry of state security with shoulder-mounted rocket launchers, blowing out windows in the building and damaging its facade. This was followed by two explosions at Transnistria’s broadcasting center on Tuesday morning, which saw two antennas that transmitted Russian radio stations being brought down.

On Thursday, Alexey Arestovich, an adviser to Ukrainian President Volodymyr Zelensky, suggested that Kiev could well “capture” Transnistria. “[We] would have managed somehow,” Arestovich said, but added that such an operation could only take place if the Moldovan authorities asked for it.

But Chisinau hurried to reject the proposal, with Moldova’s office for reintegration insisting that “the settlement of the Transnistrian issue can be achieved by political means and only on the basis of a peaceful solution.” 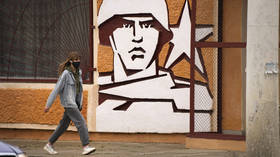 On Saturday, Russia’s Foreign Minister Sergey Lavrov said that Moldova shouldn’t be concerned by Moscow’s military operation in Ukraine. “They should worry about their own future because they’re being dragged into NATO. And I don’t think it’s going to make Moldova safer,” he pointed out.

Transnistria broke away from Moldova in the early 1990s shortly after the collapse of the USSR. The republic maintains close ties with Moscow, with Russian peacekeepers stationed there and a sizable portion of local residents holding Russian passports.

Russia sent troops into Ukraine on February 24, following Kiev’s failure to implement the terms of the Minsk agreements, first signed in 2014, and Moscow's eventual recognition of the Donbass republics of Donetsk and Lugansk. The German- and French-brokered Minsk Protocol was designed to give the breakaway regions special status within the Ukrainian state.The

Kremlin has since demanded that Ukraine officially declare itself a neutral country that will never join NATO. Kiev insists the Russian offensive was completely unprovoked and has denied claims it was planning to retake the two republics by force.