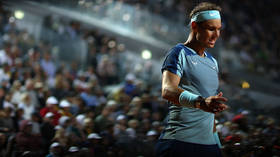 Rafael Nadal admitted he is “living with an injury” as the Spaniard limped his way towards defeat against Denis Shapovalov in Rome, triggering concerns that the 13-time French Open winner will not be fully fit for the start of the tournament later this month.

Nadal hobbled and grimaced during his 1-6, 7-5, 6-2 loss to Shapovalov in the Italian Open third round on Thursday, having already been forced to miss the start of the clay court season due to a fractured rib.

“I am a player living with an injury,” said the 35-year-old afterwards.

“That’s it. No, no, it is nothing new. It’s something that is there. Unfortunately my day-by-day is difficult, honestly.

“Even like this, I am trying hard. Of course, it’s difficult for me to accept the situation sometimes, no? It can be frustrating that a lot of days I can’t practice the proper way. Then today halfway through the second set [the pain] starts, then [it] wasn’t playable for me.” 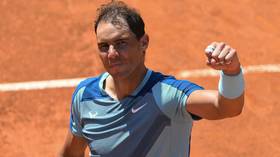 The return of his injury woes so close to the start of Roland-Garros – which gets underway on May 22 – will set alarm bells ringing for supporters of the Spaniard.

Nadal was forced to miss the last four months of last season with the foot injury which he feared could end his career.

However, the Spanish great returned in remarkable style at the beginning of this year, going on a 20-match winning streak which included victory over Russia’s Daniil Medvedev in a classic Australian Open final, handing Nadal a record 21st Grand Slam title.

Famously, 13 of those major crowns have come on the red dirt of Roland-Garros, a tournament where Nadal has reigned supreme since his first title back in 2003.

Fans in the French capital may not see the best version of Nadal at this year’s tournament, should he not be able to manage his continuing foot ailment.

“But I still [have] a goal in one week and a couple of days. I’m going to keep dreaming about that goal.” 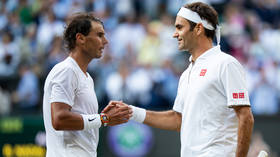 Nadal and Shapovalov last met in an ill-tempered Australian Open quarterfinal clash back in January which Nadal won in five sets.

The match was marred by claims from the Canadian that his rival gets away with slow play and receives preferential treatment from officials.

Nadal was gracious in defeat to Shapovalov in Rome, saying: “I don't want to take away credit from Denis that he deserves… Today is for him.”

Shapolov was complimentary, wishing Nadal a speedy recovery for the French Open.

Shapovalov had made headlines earlier at the tournament after yelling at the Italian crowd to “shut the f**k up” as he rowed with match officials over a line call, but will now progress to a quarterfinal meeting with Norwegian Casper Rudd. 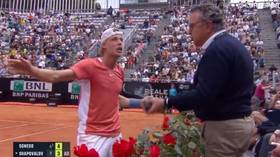 Elsewhere in Rome, world number one Novak Djokovic continued his preparations for Roland-Garros with a straight-sets victory over Swiss veteran Stan Warwinka in their meeting on Thursday.

Djokovic next faces Canadian youngster Felix Auger Aliassime. The Serb can ensure he retains his position atop the ATP rankings ahead of Medvedev by reaching the semifinals in Rome – a tournament he has won five times previously.

Djokovic, 34, will be the defending champion at the French Open. He will be bidding to draw level with Nadal on 21 Grand Slam titles after the Spaniard edged ahead in Melbourne, following Djokovic’s deportation from Australian in his visa and vaccine row with the government.