The billionaire has sold nearly $4 billion worth of stock after buying Twitter, according to regulatory filings 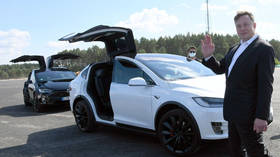 Tesla CEO Elon Musk has sold 19.5 million of his shares in the electric car company, raising $3.95 billion in the process, according to filings published by the US Securities and Exchange Commission (SEC) on Tuesday. The sale comes days after Musk completed his purchase of Twitter for $44 billion.

He unloaded the shares between Friday and Tuesday, according to the SEC. Musk, the world’s richest man, now holds around 135 million Tesla shares. However, his net worth dropped below $200 billion this week as investors continue to dump Tesla stock, which has lost half of its value from a year ago.

Musk has sold nearly $20 billion worth of his stock in Tesla since he initially invested in Twitter in April. In August, before the social media company’s legal action eventually sealed the deal for the takeover, Musk claimed that he was done selling stock.

The purpose of the sale was not disclosed. Analysts, however, have been widely expecting Musk to sell additional Tesla shares to finance the Twitter deal.

The businessman had committed to financing the takeover himself, but ended up securing $7 billion from investors, including Oracle founder Larry Ellison and the cryptocurrency platform Binance. A consortium of banks also loaned Musk $13 billion to fund the acquisition.

Shortly after completing the purchase, Musk fired Twitter’s CEO and several of its top executives, before laying off up to half of the company’s workforce.