The teenage gunman shot 14 students and a teacher, according to Governor Greg Abbott 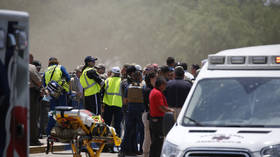 At least 14 students and a teacher were shot and killed at an elementary school in Uvalde, Texas on Tuesday, according to Governor Greg Abbott. The suspect, an 18-year-old male, also reportedly shot his own grandmother before the school slaying, and is now dead.

Abbott announced the death toll at a press conference, shortly after local hospitals reported an influx of children with gunshot wounds. Earlier reports suggested that the death toll had been much lower, and that the suspect had been taken into custody.

"He shot and killed horrifically and incomprehensibly 14 students and killed a teacher," Abbott said.

Abbott told reporters that the suspect, named as Salvador Ramos, drove to Robb Elementary School armed with a handgun and possibly a rifle, and that “it is believed” that he was shot dead by responding police officers.

“I can confirm right now that we have several injuries, adults and students, and we do have some deaths. The suspect is deceased at this point,” Arredondo said, adding that the shooter appears to have acted alone.

Little is currently known about the shooter or his relationship with the school. Uvalde and state police, as well as FBI and ATF agents, are investigating the scene.