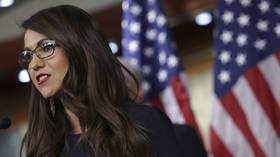 Republican Representative Lauren Boebert might resort to selling racy images of herself online, if she loses the congressional race against Adam Frisch, an MSNBC guest has said.

The crude joke came from Democratic Party strategist Kurt Bardella, a former adviser for the Lincoln Project, during a post-midterm election appearance on Joy Reid’s ‘The ReidOut’ show on Wednesday.

Reid asked about Boebert’s possible election loss, specifically “what job would she have” after Congress, considering that her gun-themed restaurant in Rifle, Colorado closed earlier this year.

“I guess it might be a gain for OnlyFans,” Bardella responded, prompting a laugh from Reid. The other guest, former Senator Claire McCaskill, was apparently shocked by the remark.

OnlyFans is a website that allows users to sell subscription access to content they produce, taking a fee for the service. While not explicitly designed as an adults-only marketplace, its growth was spurred by producers of pornographic content featuring themselves. Last year, the site infamously tried to ban sex content amid concerns from investors, but days later reversed the decision.

Neither Reid nor McCaskill, both avowed feminists, commented on the sexist tone of Bardella’s joke. The former senator later rejected claims that she “chortled along.” 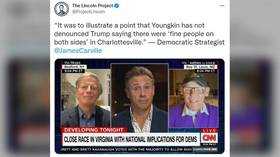 Boebert, who represents Colorado’s 3rd congressional district, may lose her seat to Democratic Frisch, though the margin between them remains razor-thin. As of 8:00 am Eastern Time, she trailed her challenger by less than 300 votes, with over 95% of ballots counted.

Boebert is among the Republican politicians who elicit the most emotional criticism from the blue camp. She has repeatedly made herself a target of the left with controversial statements and unwavering support of former President Donald Trump.

The Lincoln Project is political actions committee of anti-Trump conservatives who released video ads and made media appearances denouncing the former president during his term in office, urging never-Trump Republicans and Democrats alike to make donations.