A peacekeeping mission by the Russia-led CSTO bloc could be possible once the hostilities are over, a top Russian MP has said 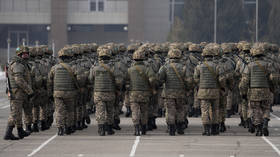 A peacekeeping mission of the Collective Security Treaty Organization (CSTO) could eventually be deployed in the “liberated” regions of Ukraine, the head of Russia’s State Duma Defense Committee Andrey Kartapolov said Monday.

“It cannot be ruled out that peacekeepers from the CSTO countries will be needed in the liberated territories of Ukraine, as well as the Donetsk and Lugansk People’s Republics,” Kartapolov told reporters.

The CSTO is a Moscow-led regional security organization, which brings together six post-Soviet countries: Armenia, Belarus, Kazakhstan, Kyrgyzstan, Russia, and Tajikistan. Earlier this year, the bloc’s peacekeepers were briefly deployed in Kazakhstan after the country’s authorities requested assistance from the CSTO amid a wave of violent unrest.

Moscow is “unlikely to agree that some NATO countries would try to creep in there under the guise of peacekeeping,” the official stressed. Still, it’s too early to talk about a peacekeeping mission while the hostilities between Moscow and Kiev are ongoing, but “different variants may be possible at the post-conflict stage,” Kartapolov continued.

It is impossible to rule out such a course of events that would require [ the CSTO’s] services, their resources will be needed. Today, I do not see the need, and the situation itself would not allow that. As long as the special military operation continues, no peacekeepers will appear there.