The situation is especially difficult in Kiev and its surrounding region, Ukraine’s president said

More than four million Ukrainians have had their electricity supply cut off, with the capital and its suburbs the worst affected, Ukrainian President Vladimir Zelensky said on Sunday. His statement followed weeks of Russian strikes on Ukrainian power infrastructure, after Moscow accused Kiev of ‘sabotage’ attacks.

In his address posted on Telegram, Zelensky noted that as of Sunday evening, power outages continue in Kiev and six Ukrainian regions. “More than 4.5 million consumers are without electricity. Most of them are now in Kiev and the Kiev region. It’s really difficult," he said.

The Ukrainian leader gave assurances that the government is preparing for all possible energy scenarios.

“Whatever the terrorists want, whatever they are seeking, we must get through this winter and become even stronger in the spring than we are now,” he stressed, claiming that Russia is concentrating its forces in preparation for more large-scale attacks on Ukraine’s critical infrastructure. 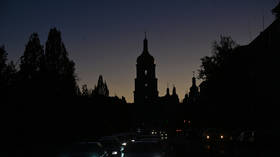 "Russia needs Iranian missiles for this particular purpose,” Zelensky said, adding that Ukraine “is preparing a response,” without providing any more details.

Both Russia and Iran have repeatedly dismissed reports that Tehran is supplying Moscow with ballistic missiles to be used in the Ukraine conflict.

In view of the dire energy situation in Ukraine, Roman Tkachuk, the director of security for the Kiev municipal government, told the New York Times on Saturday that local authorities were working on a contingency plan to evacuate about three million people from the capital, in the event of a complete power shut-down due to Russian strikes.

Ukraine has been experiencing rolling blackouts since Moscow launched strikes on its energy facilities including power stations on October 10, after accusing Kiev of targeting Russian structures, including the strategic Crimean Bridge.

According to Ukrainian authorities, the Russian attacks have destroyed or damaged up to 40% of the country’s energy infrastructure.