Argentina captain Lionel Messi has said he feels “a lot of similarities” between his country’s current group of players and the one that reached the World Cup final in 2014, and stressed the importance of starting well at Qatar 2022.

Messi was named in Lionel Scaloni’s 26-man squad on Friday and gave an interview to national sports paper Ole.

“I think it is fundamental and it marks you a lot for the rest of the World Cup,” he said, adding that La Albiceleste must start strongly against Saudi Arabia in Group A on November 22 before taking on Mexico and Poland.

Argentina are one of the favorites in Qatar due to their 35-game unbeaten streak, which includes a Copa America win. Messi said, however, that they “have to isolate [themselves] from everything that [Argentinian] people are experiencing.”

“Although we have great hope, we are also realistic and aware that we are going through a good time; at the same time we have to know that it is a World Cup, that it is very difficult,” he added.

“I feel a lot of similarities between this group and the 2014 World Cup. It is a group that always, whatever the match, plays with the same intensity and concentration and I think that is very important. And we know that we are going to fight for it but we [don’t think] we are going to be champions from the outset as Argentines think,” he added.

“Beyond the fact that it is a nice statistic and record that will remain if we meet the objective and match Italy (who hold a record of 37 games without losing), we don’t think about that either,” Messi said of the unbeaten streak. 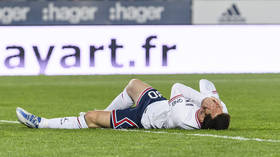 "This group is prepared for the bad ones. In fact, we have started from a bad one, this group was formed when we lost to Brazil in the semifinals of the Copa America in 2019 and from that is where what was generated was generated.

“I think we’re going to be prepared, hopefully [the difficult games] won’t be so bad and we’ll advance. But we’re fine as we arrived, without thinking about the undefeated streak,” he said.