Member of US Congress dies in car crash 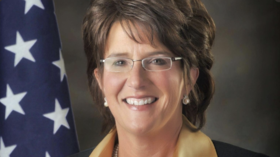 US Congresswoman Jackie Walorski (R-Indiana) died on Wednesday in a traffic collision near Elkhart, Indiana along with two members of her staff and the driver of the other vehicle. The Indiana Republican was the ranking member of the House Ethics Committee.

According to the Elkhart County Sheriff’s Office, which responded to a call around 12:30 local time, Walorski and her staffers died as a result of their injuries. The driver of the vehicle that “traveled left of center and collided head on” with their SUV died on the scene.

Walorski, 58, was accompanied by 27-year-old Zachery Potts of Indiana and 28-year-old Emma Thomson, of Washington, DC. The driver of the other vehicle was identified as 56-year-old Edith Schmucker, from nearby Nappanee.

Shortly before 4 pm on Wednesday, Walorski’s office issued a statement that her husband Dean Swihart had been informed of her passing.

“Today, we lost one of our greatest members,” tweeted the Republican Study Committee. “Jackie Walorski lived a life of public service and was a friend to all who knew her.”

“Devastated to hear the horrible news of the passing of Jackie Walorski and her two staffers,” said House minority whip Steve Scalise (R-Louisiana). “She was a dear friend who loved serving the people of Indiana in Congress.”

Though the House of Representatives is bitterly divided along partisan lines, many Democrats also sent messages of condolences to Walorski, her family, and the families of her staffers.

“My prayers are with the family and staff of my colleague, Congresswoman Jackie Walorski and the others who were tragically killed in a traffic collision today. Please keep them in your thoughts,” said Rep. Val Demings, D-Florida.

“My heart is heavy and she will be missed. She and her family are in my thoughts,” tweeted Rep. Raja Krishnamoorthi (D-Illinois).

“Words cannot express how saddened I am to learn about the loss of my dear colleague Rep. Jackie Walorski and her team members,” tweeted Rep. Shontel Brown (D-Ohio). “My thoughts and prayers will remain with the family and loved ones during this tough time.”

Walorski had represented Indiana’s 2nd congressional district since 2013, and had previously served as a state legislator from 2005 to 2010. Before going into politics, she was a local journalist, ran an animal shelter, and worked in academia before moving to Romania as a missionary.