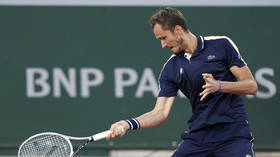 Daniil Medvedev could return to tennis ahead of schedule and appear at the French Open later this month, according to the president of the Russian Tennis Federation (FTR).

Medvedev announced that he would be out for "one to two months" in early April after deciding to undergo surgery to treat a small hernia.

Last week, however, the Moscow native shared footage of himself taking to the courts again on Instagram with his comeback previously believed to be scheduled for the Libema Open in the Netherlands on June 4.

According to RTF president Shamil Tarpischev, though, Medvedev could make the tennis calendar's next grand slam in the French Open on May 22 after having withdrawn from the Rome Masters which concludes a week before amid reports that Russian players could be banned from the Italian tournament.

"The main thing is that he does not force [his] recovery and prepares [himself] systematically.

"In principle, Daniil can play at the Roland Garros tournament in May," Tarpishchev finished.

Backing this statement is Medvedev being spotted training on clay on Monday at the Mouratoglou Tennis Academy, with the 26-year-old sharing their footage to his Instagram stories.

Due to a ban on Russian players at Wimbledon announced by the All England Lawn Tennis Club (AELTC) a fortnight ago as a response to the military operation in Ukraine, Medvedev featuring at the French Open would represent his last grand slam appearance before defending his US Open crown in New York in September.

Unlike their Wimbledon counterparts, Roland Garros organizers will not prevent the likes of Medvedev and world number eight Andrey Rublev from playing and will instead require them to perform under neutral status in line with the ATP men's tour's current guidelines.