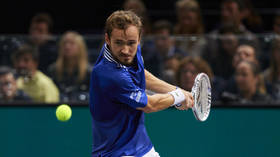 Daniil Medvedev, the world’s fifth-ranked men’s tennis player, says that anyone in the eight-man field can triumph at the ATP Finals, amid claims that Serbian star Novak Djokovic is the man to beat at the ongoing event in Turin, Italy.

Both Medvedev and Djokovic have been drawn in a fiercely competitive group which also features Andrey Rublev and Stefanos Tsitsipas in what is the final event of the 2022 ATP campaign as several of the world’s best players battle it out to end the year on a high, and claim 1,500 points to boost the winner’s world ranking.

But while some players will enter the tournament in top form, Medvedev says that the tournament will likely be decided by fine margins and that no single player should be considered a favorite over the rest of the field.

“I don’t think there is an answer to this question,” Medvedev said when asked about Djokovic’s status as the bookmaker’s pick to win.

“In the Nitto ATP Finals there is no favourite player, all tennis players are at the same time. There are great tennis players and you never really know who arrives in better mental or physical shape at the last tournament of the year.”

Djokovic, though, has been cited as being in career-best form ahead of the event as he looks to close what was a controversial 2022 on a high.

The Serb began his year by being deported from Australia ahead of the Australian Open for falling foul of the country’s Covid-19 vaccination requirements at the time.

Eight of the nine top-ranked players in the world will compete at the event, following the withdrawal of world number one Carlos Alcaraz.

“Anyone can win the 2022 ATP Finals because there are only high-quality players, there can be surprises from the first match, which at the same time would not be any surprises either,” Medvedev added.

“From my point of view, we are all favorites.”

Alongside the so-called ‘Group of Death’ featuring Medvedev and Djokovic, the other group will see Rafael Nadal, Casper Ruud, Felix Auger-Aliassime and Taylor Fritz compete for supremacy.

But while Medvedev is signaling that he believes anyone can win, his compatriot Andrey Rublev joked that he wasn’t quite overjoyed at being drawn in such a competitive group.

“I thought ‘What [am] I doing there? Why am I in this group’” he told reporters.

Norway’s Ruud scored the first win of the competition on Sunday when he defeated Auger-Aliassime in straight sets, with Nadal and Fritz to play later in the day.

Monday will see an all-Russian battle between Medvedev and Rublev, while Djokovic will face Tsitsipas.