The tennis world number one was heckled by a rude punter 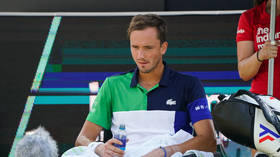 Video footage has shown Russian tennis world number one Daniil Medvedev confronting an abusive fan that called him a 'loser' following his defeat to Wimbledon finalist Nick Kyrgios at the Montreal Masters on Wednesday.

Recently winning his first tournament of 2022 at the Los Cabos Open after losing three consecutive finals, Medvedev was brought back down to earth when seen off by the Australian 6-7(1) 6-4 6-2 in the round of 32.

The blip meant that Medvedev was unable to retain his crown in the French-Canadian city, though he will hold onto the ATP world number one spot going into the US Open on August 29, where he is also the defending champion.

Over the weekend, though, footage has emerged on TikTok of Medvedev being called a 'loser' by an abusive fan that the 26-year-old Moscow native went to give a piece of his mind.

As the clip shows, Medvedev is on his way out of the Stade IGA with his bag in tow and immediately turns round when he hears the jibe directed at him.

Security then become alert to a potentially nasty situation and swarm the world's leading tennis player as he asks: "What did you say?"

With the conversation getting spicy, Medvedev informs his detractor that he is "super calm" but also that he doesn't like his choice of words.

Others present tell the man to apologize and film the exchange. With Medvedev making hand gestures, he also talks about eye contact and orders the heckler: "Don't look down."

Deciding to walk away with security following him, Medvedev points back in the fan's direction before the video cuts off.

Now on the road to Flushing Meadows in the hard court season, Medvedev will rock up at the Cincinnati Open next where he is set to face an unnamed opponent again in the round of 32. 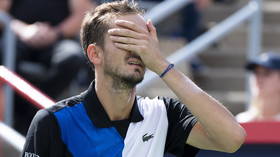 The ATP has revealed how Medvedev and his Australian Open final opponent Rafael Nadal have been kept apart in the draw, and Medvedev needs two wins at the competition known as the Western & Southern Open in order to keep his number one ranking through the US Open.

In the quarter-finals, he could meet Kyrgios again and have the chance to avenge his hiccup in Montreal that saw him singled out by a party that should perhaps keep their thoughts to themselves next time.