A box of teeth showcased by Kiev to blame Moscow for atrocities was part of a local dentist’s collection, Bild reported 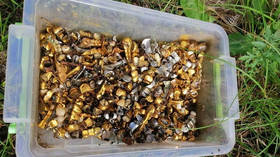 A pile of gold teeth, which Ukraine alleged had been pulled from civilians by Russian troops to torture them, actually belonged to a local dentist, Bild reported on Wednesday.

On Tuesday, the Ukrainian Defense Ministry posted a picture on Twitter of what it called “a torture chamber” in Peski Radkovskiye, a town in Kharkov Region. The photo depicted a gas mask, which, according to the ministry, was used to torture the local population, and a box of gold dental crowns lying on the grass.

“How many more will be found in occupied Ukraine?” it asked, hinting that it was Russian troops who had committed the atrocities.

However, according to Bild, the teeth apparently belonged to patients of a local dentist, not to Ukrainian torture victims.

“These teeth look like those stolen from my collection,” Sergey, 60, told the outlet when he was shown the photo distributed by the Ukrainian authorities. “I’m the only dentist here. So if they were found here, they must have come from me.”

When asked if the teeth could have come from dead people, the dentist categorically dismissed the notion. “Oh God, no! They belonged to the people I’ve treated all these years. I pulled out these teeth because they were bad,” he explained.

The dentist also voiced suspicions that it was Russian troops who stole them, either because they thought them to be made of gold, or to intimidate local residents. 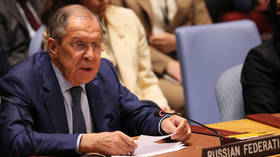 While the teeth were not a product of torture, local residents claimed that Russian troops had been involved in a number of alleged atrocities. They said soldiers had beaten some local residents and used them as forced labor for digging trenches. Moscow has repeatedly denied allegations that it has committed war crimes in Ukraine.

Russia sent troops into the country on February 24, citing Kiev’s failure to implement the Minsk agreements, designed to give the regions of Donetsk and Lugansk special status within the Ukrainian state. The protocols, brokered by Germany and France, were first signed in 2014. Former Ukrainian president Pyotr Poroshenko has since admitted that Kiev’s main goal was to use the ceasefire to buy time and “create powerful armed forces.”