Mayor of Russian-held city in Ukraine injured in explosion

The blast rocked an apartment block in Energodar, wounding the official and two of his guards 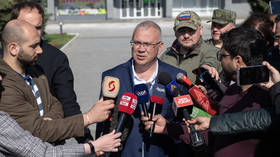 The mayor of the Russian-held city of Energodar in southeast Ukraine and two of his security guards were injured in an explosion on Sunday, local law enforcement said.

The blast occurred in the entranceway of an apartment block where the mother of Mayor Andrey Shevchik reportedly resides. An improvised explosive device was planted inside an electrical distribution box, a police representative told Russia’s TASS news agency.