The rocket-launcher system is part of Berlin’s latest weapons transfer to Kiev. 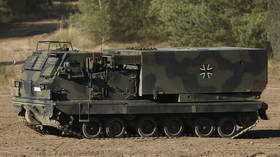 The third in a batch of Mars-II multiple-launch rocket systems (MLRS) from Germany has arrived in Ukraine, the country’s Defense Minister Alexey Reznikov announced on Twitter on Monday.

“Third brother in the Long Hand family – MLRS MARS II from Germany – has arrived in Ukraine. Thank you to Germany and personally to my colleague #DefenceMinister Christine Lambrecht for these systems. Our artillerymen salute our German partners!” the minister tweeted.

The Mars-II is a German, Italian and French-developed modification to the US-made MLRS M270 multiple rocket launcher. According to the German company KMW, one of the system’s producers, the Mars-II is capable of firing up to 12 missiles per minute with a range of over 70 kilometers. These missiles can be guided using a GPS or mine-ejecting missiles.

Berlin confirmed the shipment to Ukraine of the rocket systems last week, along with three PzH 2000 self-propelled howitzers, totaling ten such pieces of equipment. In her remarks last week on the subject, German Defense Minister Christine Lambrecht also spoke of five self-propelled ‘Gepard’ anti-aircraft guns, whereas Berlin had previously promised at least 30. Kyiv confirmed receiving three of them, along with “tens of thousands of rounds” of ammunition. 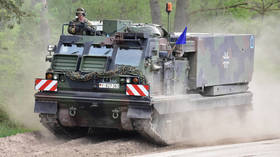 In addition, Berlin committed a Cobra-type artillery radar to Ukraine, set for delivery in September. According to Lambrecht, Kiev has already signed the contract for the materials and troops should be starting training for “this highly complex system.”

Media reports suggest that Ukrainian soldiers should have also begun training on the Iris-T SLM anti-aircraft missile system, which is Germany’s most advanced air-defense system. That announcement had earlier caused confusion because Germany’s armed forces reportedly do not have a ground-based version of the Iris-T themselves. Nonetheless, Kiev should receive the system no earlier than November, according to reports.

Despite the deliveries, German officials have faced criticism over what has been deemed lackluster military support for Ukraine. Critics have accused Berlin of being reluctant to send needed military supplies and have blasted slow deliveries. The head of the Bundestag’s defense committee, Marie-Agnes Strack-Zimmermann, took aim at German Chancellor Olaf Scholz’s office over this issue.

“The narrowest point that slows down Germany’s military commitment is, for whatever reason, the chancellery,” the MP with the Free Democratic Party (FDP) said, in an interview with the Bayern media group published on Saturday.

For her part, Defense Minister Lambrecht has said repeatedly that Germany’s military stocks are limited, which might explain any discrepancies.