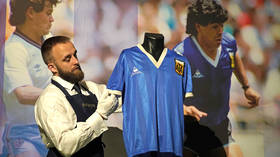 The football shirt worn by Diego Maradona when scoring his iconic 'Hand of God' goal against England at the 1986 World Cup has been sold for £7.14 million ($8.9 million) at auction, smashing an all-time the record for sports memorabilia.

A group of Argentines had reportedly arrived in London looking to prevent the sale by Sotheby's, with the item previously owned by ex-Tottenham Hotspur midfielder Steve Hodge.

Hodge played in his country's 2-1 quarter-final defeat to the eventual winners of the Mexico-held tournament, Argentina, and then swapped shirts with Maradona, who passed away in late 2020.

In four inspired minutes at the start of the second half with the match still scoreless, Maradona first rose above Peter Shilton to punch the ball past the imposing 'keeper before later famously claiming it was the 'Hand of God' that put Argentina 1-0 up.

For his second effort, Maradona embarked on a genius slalom run past a number of hapless Three Lions stars from his own half to slide the ball past Shilton and complete what was later voted the 'Goal of the Century'.

Managing to exchange tops with Maradona at full time after England could not capitalize on an 81st-minute Gary Lineker consolation, Hodge had previously loaned the garment to the National Football Museum in Manchester for 20 years.

"I have been the proud owner of this item for over 35 years, since Diego and I swapped shirts in the tunnel after the famed match," Hodges previously said. "It was an absolute privilege to have played against one of the greatest and most magnificent football players of all time.

"It has also been a pleasure to share it with the public over the last 20 years at the National Football Museum, where it has been on display. The Hand of God shirt has deep cultural meaning to the football world, the people of Argentina, and the people of England and I’m certain that the new owner will have immense pride in owning the world’s most iconic football shirt," Hodges added.

Just like Maradona's opening goal in the match, however, which was played to a backdrop of Falklands War tension between the two countries, the sale by Sotheby's has been shrouded in controversy.

Arriving at the last minute to try and hijack the sale, a delegation made up of members of the Argentine FA (AFA), a private memorabilia firm, and some of the former player's family reportedly arrived in London and wanted the item to take pride of place in a Maradona-themed museum in the Argentine capital Buenos Aires.

"He is selling something that belongs to Maradona and the AFA without authorization," a member of the group complained to The Sun of Hodge.

"It should be in Argentina [so] all Argentines can enjoy it – and not for a millionaire to display it in his closet," they insisted.

The delegation still wanted the item despite Maradona's family previously claiming that Hodge has the shirt Maradona wore in the first half, which would mean that the one he donned for the 'Goal of the Century' and 'Hand of God' is still at large.

Auctioneer Sotherbys claimed that they had been able to verify beyond doubt that Hodge did indeed have the authentic shirt, though, and a huge opening bid of £4 million ($5 million) for the item came in when it went up for sale on April 20. 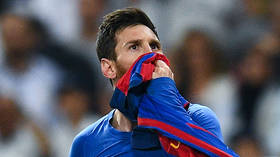 No further bids were incoming until a fortnight later on closing day, as a flurry of late offers pushed the final price to £7.14 million ($8.7mn) which in turn broke a string of records.

First off, the sale had already obliterated that previously held by Pele's 1970 Brazil World Cup final shirt, which sold for a relatively modest £157,750 ($196,000) in 2002, for the most expensive football shirt through the opening bid.

Last weekend, though, another football enthusiast may have briefly boasted top honors when paying $450,000 for Lionel Messi's 2017 shirt worn for FC Barcelona against Real Madrid, which was held up to the Bernabeu crowd after Maradona's compatriot scored a stoppage time winner in El Clasico.

Irrespective of this, the Le Coq Sportif garment donned by Maradona has also smashed the highest fee handed over for a sports jersey previously set by the $5.64 million paid for Babe Ruth's 1928-1930 New York Yankees pinstripe effort in 2019.

Not done, there, though, it is now the most expensive piece of sports memorabilia of all time after slightly pipping the $8.8 million Russian billionaire Alisher Usmanov shelled out for the original 1892 Olympic Games manifesto in February 2020.