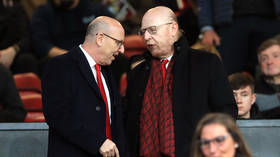 The Glazer family might consider selling a minority stake in Premier League football giants Manchester United, according to a report that has cited sources familiar with the situation.

The Glazers have owned United since 2005 but have come under increased scrutiny due to a perceived lack of investment and a five-year trophy drought overlapped by a failure to win the English top flight title in almost a decade.

With protests against their rule commonplace before kick-off on matchdays at Old Trafford, the Glazers have already held some preliminary discussions about possibly bringing in a new investor, sources have told Bloomberg.

But though the discussions are ongoing, there's still no certainty that the Glazers will ultimately decide to sell a piece of their club.

Furthermore, the Glazers aren't ready to completely sell United and cede control of the northwestern English outfit, which it is believed could be valued at around £5 billion ($6 billion).

The Independent says offers around that mark may tempt the Glazers into handing over power and that industry experts insist there is a "strong possibility" of a sale taking place in the next one to two years.

Despite being bottom of the league and winless thus far in 2022/2023, United are likely to attract big investors as one of the world's most famous sporting institutes.

This week, Tesla tycoon and world's richest man Elon Musk tweeted that he was buying the Mancunians before later claiming to be joking.

The Glazers currently own shares in the club that represent roughly 97% of voting power at Old Trafford while spearheaded by executive co-chairmen and directors Avram and Joel Glazer plus Kevin Glazer, Bryan Glazer, Darcie Glazer Kassewitz and Edward Glazer who sit on the board.

On Saturday, following a horrific 4-0 loss away at Brentford, United legend and Sky Sports pundit Gary Neville went on a passionate seven-and-a-half minute rant that dug into the Glazers for not being more accountable in their running of the club during its fall from grace.

Neville also pointed to the decaying state of the club's ground and the need for investment, and a Swiss Ramble thread has revealed this week how the Glazers have sucked £1.1 billion ($1.33 billion) out of United since the mid-00s.

Next Monday, Erik ten Hag's struggling squad take on bitter rivals Liverpool at Old Trafford where further protests against the Glazers' rule could be expected.