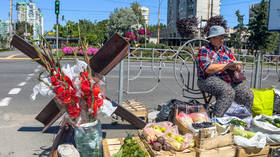 Earlier this week, state-owned companiesUkrenergo and Ukravtodor requested a two-year freeze on payments on almost $20 billion in international bonds. The country’s overseas creditors agreed to suspend interest payments and postpone the maturity date of the bonds by two years.

This is expected to save Ukraine about $6 billion on payments, Ukrainian Prime Minister Denis Shmygal said, commenting on the move.

“Given the announced terms and conditions of the restructuring, and in line with our criteria, we view the transaction as distressed and tantamount to default,” the agency said.


READ MORE:
Ukraine may have to close down industries – WaPo