The Spanish capital could help Kiev deal with shortage of manpower on battlefield, the official suggested 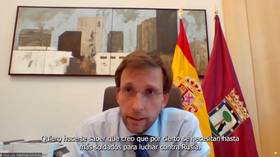 The city of Madrid could provide transport to Ukrainian men who could be deported to their home country and then enrolled into the military to fight against Russia, the mayor of the city told Russian pranksters, who were posing as a senior Ukrainian official.

“I think … it is necessary to provide more soldiers to fight against Russia,” Jose Luis Martinez-Almeida said, according to a video released on Wednesday.

The apparent pledge to enforce deportations of Ukrainian men of fighting age to “die on the battlefield or win” against Russia, as the pranksters described it to Almeida, was made in a video call shortly before Madrid hosted a NATO summit in late June.

The footage was released by Vladimir Kuznetsov and Aleksey Stolyarov, Russian comedians who usually go by the nicknames Vovan and Lexus and are famous for deceiving public figures into making awkward remarks in conversations they expect to remain private. They posed as the Mayor of Kiev, Vitali Klitschko, to get in touch with the Spanish politician, the duo told the Russian media.

The fake Klitschko asked Almeida if his office could confiscate homes in Madrid owned by Russians and give them to Ukrainians “for free.” The mayor remarked that his country was doing its best to comply with the EU’s anti-Russian sanctions. He said his office didn’t identify any property in his city subject to Brussels-ordered seizures, or Russian property. 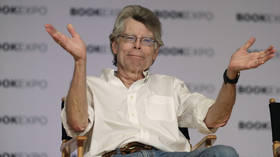 As a personal opinion, he said it was “necessary to punish Russian bastards here in Spain and in Madrid.” It’s hard to tell who exactly he was referring to due to the editing of the interview. Almeida apparently is not fully fluent in English, since during the call he several times asked an interpreter to offer the right translation from Spanish.

The callers claimed that pro-Ukraine activists were planning to stage a protest during an upcoming NATO summit, showing up naked as a symbol of Ukraine’s defencelessness against Russia and throwing feces at NATO leaders.

Almeida remarked that he didn’t believe that such a performance would help Ukraine’s cause, but promised to consult about it with the Ukrainian ambassador in Spain. He declined to participate in the proposed nude stunt, joking that he didn’t have the body for it.

Other parts of the call mostly dealt with the mayor’s local issues, like his criticism of late Spanish writer Almudena Grandes. He previously said he didn’t believe that she deserved the honorary title of the favorite daughter of Madrid, which the city council granted to her in February. Almeida confessed to ‘Klitschko’ that he had not read any books by Grandes, after the caller declared his antipathy towards the Spanish writer.

Dozens of Western officials have fallen for the trickery of Vovan and Lexus over the years. US filmmaker David Lynch, horror writer Stephen King and British Secretary of Defence Ben Wallace were among their latest high-profile targets.

YouTube banned the pranksters’ channel in May, allegedly after the British government put pressure on the video-sharing platform over the Wallace prank.