In a phone call with his Iranian counterpart, the French leader expressed his ‘disappointment’ over the stalled nuclear talks 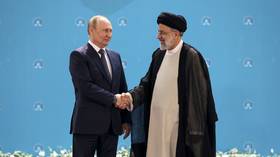 French President Emmanuel Macron held a lengthy phone conversation with Iran’s Ebrahim Raisi on Saturday, revolving around the efforts to revive a crucial nuclear agreement with the Islamic Republic. The call lasted for nearly two hours and came on the heels of a high profile meeting between the leaders of Iran, Turkey and Russia earlier this week.

According to Macron’s office, the French leader bluntly “expressed his disappointment at the lack of progress and insisted to President Raissi that a clear choice must be made to conclude the agreement and return to the implementation of its nuclear commitments.”

A deal was “still possible” but must happen “as soon as possible,” Macron added.

In turn, the Iranian president slammed the four Western signatories of the 2015 Joint Comprehensive Plan of Action – the United States, UK, Germany and France – for their “unconstructive stance and measures.”

Raisi said he is committed to reviving the deal, but insisted a viable agreement can only be reached “if safeguard issues are resolved completely, other parties give guarantees that they remain committed to the agreement and Iran’s economic interests are upheld.” 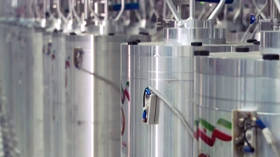 The JCPOA, which had also been signed by Russia and China, has effectively fallen apart after then-US President Donald Trump unilaterally withdrew from the deal in 2018, with Washington re-imposing old sanctions and slapping new ones on Tehran. Iran, in turn, gradually suspended its obligations under JCPOA, installing new uranium-enriching equipment and boosting output of the radioactive material.

During the call, Raisi noted the detrimental effect of US-imposed unilateral sanctions on the entire global economy, and “especially Europe.”

He also claimed that Iran “has always played a great role in protecting security,” rejected “foreign interference,” and insisted that “regional issues should be resolved by the region’s countries and governments” – somewhat echoing the spirit of his joint statement with Russian President Vladimir Putin and Turkish leader Recep Tayyip Erdogan following a meeting in Tehran this week. 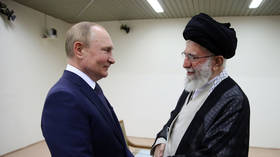 While Iran has long-maintained it had never sought to develop nuclear weaponry, the country has ramped up its nuclear activities over the past few years. A senior adviser to Iran’s Supreme Leader Ali Khamenei provocatively claimed said last week that Iran is technically capable of producing a nuclear bomb but no political decision on such an option has been made

Efforts to revive the deal have yielded no result so far, with the US and Iran repeatedly trading blame for lack of progress. Tehran maintains it is Washington’s responsibility to return to the original agreement and lift sanctions in full, while US officials have claimed that Iran has been raising new demands during JCPOA talks.