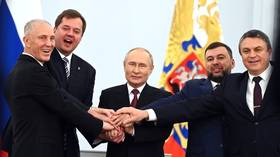 Russian President Vladimir Putin has signed documents paving the way for the formal acceptance by the Russian Federation of the Donetsk and Lugansk People’s Republics as well as Kherson and Zaporozhye Regions. The treaties await ratification by the Russian Parliament.

According to Moscow, Friday’s decision followed a democratic vote, in which people living in the former regions of Ukraine exercised their right to self-determination and requested Moscow’s protection from Kiev.

The historic move was condemned and rejected by Kiev and its foreign backers, which described the move as annexation of sovereign Ukrainian territory.

RT takes a look back at how an armed coup in Kiev eight years ago led to a change of European borders amid a major armed conflict.