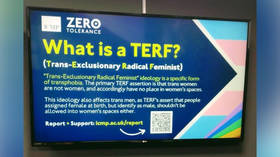 Responding to accusations of a ‘witch hunt,’ the college’s CEO, Paul Kirkham, said in a statement that the institution simply intended “to communicate the definition of TERF” but “got it wrong.”

The term is widely considered derogatory and is used to describe people who believe that biological gender cannot change, advocates say their views are “gender-critical.” Harry Potter author, JK Rowling, has been branded a TERF for her negative attitude to transgender ideology.

“The signage is clunky and we can see how it can be misinterpreted as an ICMP view and/or policy. The signage has now been removed and we apologise profusely for any offence caused,” Kirkham said.

He explained that his institute is against “discrimination of any kind” and admitted that gender-related issues are “a complex and important subject.”

The controversial on-campus sign claimed that ICMP has “zero tolerance” for TERF, which was described as “a specific form of transphobia.”

“The primary TERF assertion is that trans women are not women, and have no place in women’s spaces,” the sign explained. This “assertion,” also applies to men who were born female.

“Report + Support,” it urged, with an arrow pointing to a QR code apparently containing a link to the college’s reporting system.

Photos of the alert prompted outrage on social media.

“Witch hunts have QR codes now. Find the witch, use the QR code, ‘report and support.’ Modern life is wonderful, isn't it,” Kathleen Stock, a philosophy professor forced out of Sussex University in transphobia row, wrote on Twitter.

“A music hall for zero tolerance to 98% of the population,” another Twitter user noted, as a third commenter wondered if any institutions “not captured by Woke ideology” still exist.