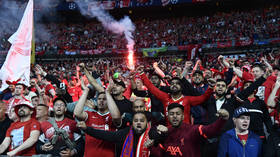 Premier League side Liverpool say that they are “hugely disappointed” at reports that sections of their supporters were targeted by French police ahead of Saturday night's Champions League final against Real Madrid in Paris, and have requested a formal investigation into the matter.

Kickoff for the match was delayed by 36 minutes as thousands of Liverpool supporters attempted to gain entry into the Stade de France in Paris, prompting a bottleneck which led to flashpoints between fans and police as French authorities used pepper spray and tear gas in a bid to restore order.

UEFA announced that fans of Liverpool “who had purchased fake tickets which did not work” were responsible for delaying entry into the ground for legitimate ticket holders, but pledged investigate the circumstances which led to police deploying tear gas.

Liverpool said afterwards that the scenes outside the stadium were “unacceptable”.

“Supporters should not have to experience the scenes we have witnessed tonight,” they said in a statement. “We have officially requested a formal investigation into the causes of these unacceptable issues.”

English football pundit and former international player Gary Lineker was among those who had trouble gaining entry to the stadium, and he later made his feelings clear on social media.

“I’m not sure it’s possible to have a more poorly organised event if you tried,” he posted to Twitter. “Absolutely shambolic and dangerous.”

In their own statement, UEFA appeared to put the blame on Liverpool supporters who had bought forged tickets.

“In the lead-up to the game, the turnstiles at the Liverpool end became blocked by thousands fans who had purchased fake tickets which did not work in the turnstiles,” they said.

“This created a build-up of fans trying to get in. As a result, the kick-off was delayed by 35 minutes to allow as many fans as possible with genuine tickets to gain access.

“As numbers outside the stadium continued to build up after kick off, the police dispersed them with tear gas and forced them away from the stadium. UEFA is sympathetic to those affected by these events and will further review these matters urgently together with the French police and authorities, and with the French Football Federation.”

This stance was rubbished by many, with the prevalent opinion of many of those at the match being that if fans were late gaining entry to the stadium that was solely due to UEFA's disorganisation outside of it.

Regardless, the violent scenes have once again called into question UEFA's handling of major events.

Last year's Euro 2020 final at Wembley was marred by similar scenes of crowd trouble, which was largely blamed on supporters attempting to gain entry to London's Wembley Stadium with counterfeit tickets, while numerous fans also brawled inside the arena.

Last week's Europa League final in Seville also came under fire amid reports of poor stewarding and a lack of water for fans in the sweltering conditions which led to fans being forced to drink out of bathroom taps and pitch-side sprinklers.

Liverpool's frustration, meanwhile, was compounded by their 1-0 defeat to Real Madrid in what is European club football's annual showpiece fixture.