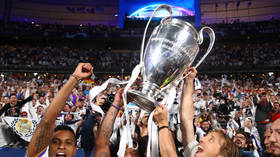 A repeat of last season’s Champions League final between Real Madrid and Liverpool was the highlight of Monday’s round of 16 draw, which also pits Paris Saint-Germain against multiple-time winners Bayern Munich.

Real Madrid were victorious over Jurgen Klopp’s Liverpool in May in a final that took place in Paris after the flagship event was stripped from St. Petersburg as part of the sporting sanctions imposed on Russia over the ongoing military operation in Ukraine.

A 59th minute goal from Real Madrid’s Vinicius Junior was enough to overcome Liverpool on that occasion, and Carlo Ancelotti’s side will be confident of repeating that win given Liverpool’s recent patchy form. They are currently languishing in a mid-table position in the Premier League after 13 games.

It will be the fourth time in six seasons that Liverpool and Real Madrid duel in European club football’s most prestigious competition, with Los Blancos coming out on top when they met in the final in 2018 and 2022.

The reigning Spanish champions also eliminated Liverpool from the competition in 2021, though the Reds will be hopeful of triumphing after appearing in three of the past five Champions League finals.

Elsewhere, Lionel Messi’s pursuit of silverware in the colors of PSG will have to come at the expense of six-time champions Bayern Munich in another blockbuster fixture, while Chelsea will also face German opposition after being paired with Borussia Dortmund.

The Europa League draw, meanwhile, has also thrown up some interesting fixtures – not least of which is the dramatic pairing of European giants Manchester United and Barcelona.