Duty-free stores for people with special papers to open in Moscow and St. Petersburg 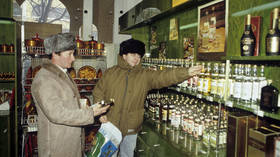 The Russian government has decided to open two specialty stores in Moscow and St. Petersburg, selling alcohol, tobacco, candy, cosmetics, jewelry, smartphones and watches. The duty-free establishments will take both rubles and foreign currencies. The twist is that only people with special documents will be able to shop there, just like at the “Beryozka” shops in Soviet times.

Though the government published the decision on July 27, Russian media outlets took notice on Wednesday. It goes into effect on August 27, but it is unclear whether the stores will open by then, or at a later date. The exact location of the two stores is still to be determined as well.

“Back in Soviet times, my friends worked abroad, and there were shops for diplomats that had certain discounts. These outlets allow diplomats to freely buy goods that they cannot import or buy in the host country,” Russian Senator Vladimir Dzhabarov told the Parliamentary Gazette.

Foreign diplomats, family members, and employees of international organizations will be able to shop there, so long as they have special accreditations from the Russian Foreign Ministry. Prices will be listed in rubles, euros and dollars. The Russian customs service will be in charge of the stores, which will only sell the merchandise normally subject to the duty-free regime.

It did not take long for the initiative to be compared to the legendary “Beryozkas,” a chain of stores that first appeared in 1961. However, they catered not just to diplomats, but also to the military and certain Soviet workers operating abroad, who were allowed to use their foreign currency at the state-operated shops. “Beryozka” also sold food and clothes, which the new stores will not do.

The first stores were opened at the Sheremetyevo and Vnukovo airports in Moscow, and the hotels “Ukraine” and “Leningrad” – two of Moscow’s “seven sisters” high-rises. The chain later branched out to the capitals of all Soviet republics, larger regional centers, and popular tourist resort cities such as Sochi, Sevastopol, and Yalta. After the USSR dissolved, the chain was privatized and went bankrupt in the mid-1990s, as it was no longer profitable.