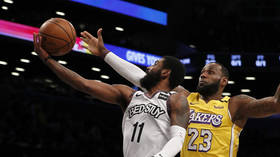 NBA icon LeBron James has expressed his dismay at the actions of former teammate Kyrie Irving amid an ongoing anti-semitism row which has led to the suspension of the Brooklyn Nets superstar.

Irving is currently serving a ban of at least five games after he posted a link on social media to a controversial documentary which promotes fringe theories related to the Holocaust and other anti-semitic tropes, leading to a swirl of controversy from fans and objections from sponsors such as Nike, who announced in recent days that they had called off an upcoming shoe release associated with Irving.

Irving has since apologized for his actions but not before James, with whom he played with for Cleveland Cavaliers between 2014 and 2017, issued a stinging rebuke of his former colleague.

“I believe that what Kyrie did caused some harm to a lot of people,” James said.

“He apologized. But he caused some harm and I think it’s unfortunate. But I don’t stand on the position to harm people when it comes to your voice or your platform or anything. So it doesn’t matter what color your skin is, how tall you are, what position you’re in.

“I hope [Irving] understands what he did and the actions that he took are just harmful to a lot of people. I really didn’t get into it too much. But, I understand that when you’re hurting anybody, I understand that. That is just common sense.”

Meanwhile Irving’s team, the Brooklyn Nets, has issued a list of demands that Irving must adhere to before he is permitted to resume team activities.

It was reported that he must apologize publicly for the promoting the documentary, and that he must meet with NBA commissioner Adam Silver – who is Jewish, and members of New York's Jewish community.

He must also repair his relationship with Nets owner Joe Tsai, who was understood to have attempted to contact Irving without success.

Other reports have indicated that Irving has been told he must pay a $500,000 donation to anti-hate charities, as well as undergo a course to make him more knowledgeable about anti-semitism.

James, meanwhile, has also moved to distance himself from comments made by rapper Ye, formerly known as Kanye West, and has cancelled the release of an interview due to be released on James’ media platform after West’s own anti-semitic comments drew widespread criticism recently.