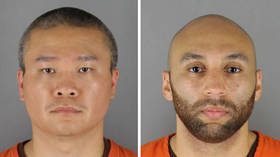 Two former Minneapolis police officers involved in George Floyd’s fatal arrest have been given prison sentences, marking the last convictions related to the incident that sparked riots across the US in 2020.

According to a statement on Wednesday by the Department of Justice (DOJ), 36-year-old Tou Thao and 28-year-old J. Alexander Kueng have been sentenced to three and a half and three years in prison, respectively, “for depriving George Floyd Jr. of his constitutional rights.”

In February, a federal jury in a Minnesota court found Thao and Kueng guilty of failing to stop the “use of unreasonable force” by their colleague Derek Chauvin, and of failing to help Floyd despite his “clear need of medical care.” For nine minutes, while Chauvin was kneeling on the back of Floyd’s neck as he was pinned to the pavement, Kueng held his torso and Thao restrained bystanders.

“The jury further found that both of these offenses resulted in Floyd’s bodily injury and death,” the DOJ said. 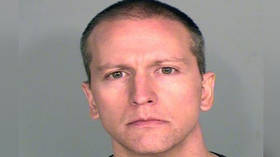 Earlier this month, another former police officer, Thomas Lane, who was holding Floyd’s legs, was sentenced to two and a half years in prison after being found guilty of “depriving Floyd of his constitutional right to be free from a police officer’s deliberate indifference to Floyd’s serious medical needs.”

Prior to that, Derek Chauvin was convicted of murder for his role in Floyd's death and was sentenced to 21 years in prison.

“All four officers involved in the tragic death of George Floyd have now been convicted in federal court, sentenced to prison and held accountable for their crimes. George Floyd’s death could have been prevented if these defendants had carried out their affirmative duty to intervene to stop another officer’s use of deadly force,” Kristen Clarke, Assistant Attorney General of the Justice Department’s Civil Rights Division, said.

The May 2020 arrest of George Floyd was caught on video and sparked Black Lives Matter protests, some of which turned violent, leaving dozens of Americans dead and causing billions of dollars in property damage.