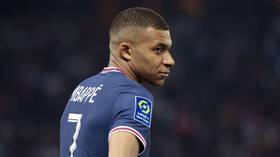 Spanish league chiefs have announced they are to file a complaint to UEFA, French courts and the European Union regarding the circumstances of Kylian Mbappe's contract renewal with French powerhouse club Paris Saint-Germain.

Mbappe, considered by many to be among the finest young talents in world football, had appeared to be on the brink of agreeing a deal to move to Real Madrid upon the expiration of his deal in the French capital this summer, but broke Spanish hearts when it was revealed that he had made an eleventh-hour reversal and opted to sign a new contract with PSG until 2025.

The French international has been a long-term target for Real Madrid. The recently-crowned Spanish champions made two bids to sign the player last summer but were rebuffed both times by PSG – but had appeared sure that a deal would be secured this summer.

However, according to The Athletic sources within PSG said that any confidence that an agreement was a formality was misguided, and that they had continued in their bid to convince the 23-year-old Paris native to remain with the club – even going so far as to make him central to the club's brand as its public face.

There were even reports which suggested that Mbappe would be given a measure of control of the club's future plans moving forward.

But in a scathing statement on Saturday, La Liga authorities announced that they felt the terms of Mbappe's extension in Paris are “scandalous”.

“On Kylian Mbappe's possible announcement to stay at PSG, La Liga wishes to state that this type of agreement attacks the economic stability of European football, putting at risk hundreds of thousands of jobs and the integrity of the sport, not only in European competitions, but also in domestic leagues,” Spanish league chiefs said.

“It is scandalous that a club like PSG, which last season reported losses of more than 220 million euros after accumulating losses of more than 700 million euros in prior seasons (while reporting sponsorship income at doubtful valuation), with a squad cost around 650 million for this season, can close such an agreement, while those clubs that could afford the hiring of the player without seeing their wage bill compromised, are left without able to sign him.

“La Liga will file a complaint against PSG before UEFA, the French administrative court and fiscal authorities and European Union authorities to continue to defend the economic ecosystem of European football and its sustainability.”

Central to La Liga's complaint is a question as to how PSG could afford to renew Mbappe's deal while staying within the confines of Financial Fair Play (FFP) restrictions, while also suggesting that there may be financial impropriety related to some of the club's sponsorship deals.

La Liga president Javier Tebas also hit out at the Mbappe deal on Saturday, saying that the French club's financial dominance is an “insult to football”.

“What PSG is going to do by re-signing Mbappe with large amounts of money (which who know from where and how they (PSG) pay him) after losing 700 million euros in the last seasons and having 600 million euros in salary expenses, is an INSULT to football,” he said.

“[PSG president] Al-Khelaifi is as dangerous as the Super League.”