The US official’s journey was a “clear provocation” but it is unlikely to result in a major armed conflict, Moscow believes 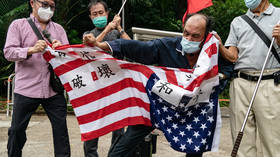 The visit that US House Speaker Nancy Pelosi paid to Taiwan this week is a “clear provocation” that has nothing to do with supporting democracy, the Kremlin believes. But despite the spike in US-China tensions that it triggered, the stunt is unlikely to lead to major hostilities, the spokesman for the Russian president’s office has said.

“I would suggest not to throw around words as serious [as ‘global war’],” Dmitry Peskov told the media when asked about the situation. That said, “underestimating the level of tension sparked by this visit” is not advisable either, he added.

Pelosi arrived in Taiwan in what she described as a gesture of support of its “democratic” administration against “authoritarian” nations. She went through with the visit despite objections from Beijing. China considers the self-governed island part of its territory, a position that the US formally acknowledged in the 1970s.

Taiwan was the last stronghold of Chinese nationalist forces defeated by communists during the 1940s civil war. Despite recognizing the government in Beijing as the sole representative of the Chinese people, Washington has maintained an informal relationship with Taipei for decades.

Beijing perceives the visit by Pelosi – a first for a speaker of the US House in 25 years – as an attack on its ‘One China’ policy. It warned that there will be consequences for it.