The leader of the self-ruled, partially recognized Serbian region blamed Russia for the latest flare-up of tensions 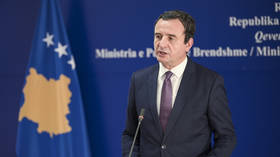 Kosovo is preparing for an armed conflict with Serbia and is ready to take on its opponent, Albin Kurti, who holds the office of prime minister in the breakaway Serbian province, told Reuters on Wednesday.

“We have our institutions and organs of security and defense; Kosovo is a state now, this is not the year 1998,” the official was quoted as saying. “This is 2022, so we are much more prepared to defend our sovereignty, territorial integrity, to defend our democracy, rule of law, constitutionality, and to defend our progress.”

Kosovo broke away from Serbia in a bloody guerrilla war in the late 1990s, which ended in Pristina’s favor after NATO waged a bombing campaign against Belgrade in 1999. The US and many of its allies recognized Kosovo as a sovereign state after its parliament voted to declare formal independence in 2008, but Belgrade and nations like Russia and China did not.

Predominantly ethnically Albanian, Kosovo also has a Serbian minority. Some 50,000 of the Serbs live in the northern parts that border Belgrade-controlled Serbia. Last month, a crisis loomed there over Pristina’s attempt to enforce a law that requires drivers to use Kosovan license plates, a policy which has long been a trigger issue.

The planned crackdown sparked mass protests of Serbs in Kosovo, who erected roadblocks and confronted police forces, as the government of Kosovo said it would ban vehicles with Serbian plates from crossing the border. The tension was deflated after the US and the EU put pressure on Pristina to delay the August 1 deadline by a month.

Kurti alleged that the crisis had been masterminded by Moscow, Belgrade’s traditional ally, supposedly to distract attention from the Russian military operation in Ukraine.

“Despotic President [Vladimir] Putin is a man of war and he would have interest in spreading war because he wants to normalize war,” he told Reuters. 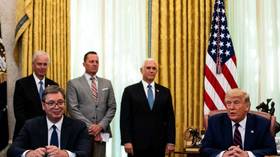 Russia accused Pristina of causing the escalation and suggested that Washington had been the beneficiary, at the expense of Europe.

“The EU, just like it was in the case of Ukraine and in the case of anti-Russian sanctions, is following instructions from Washington, contrary to its own interests,” Russian envoy in Belgrade Alexander Botsan-Kharchenko said last week. “Washington benefits from a smoldering conflict. It benefits from keeping the situation on the brink of collapse.”

Washington’s former special envoy for Kosovan affairs, Richard Grenell, likewise believes that Pristina, and Kurti personally, were responsible for the crisis. The prime minister is “trying once again to give it [to] Serbia,” tweeted the ex-official, who served under President Donald Trump and helped resolve a standoff in 2020.

Grenell and Kurti have had conflicts in the past. The Kosovan official accused the American of orchestrating a parliamentary coup against his cabinet. His first term as prime minister lasted just four months and was derailed by a March 2020 no-confidence vote, but was returned to the office in March 2021.