The victim was hospitalized with serious injuries after a “terrible attack,” Wuppertal city authorities said 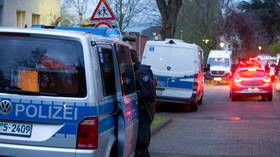 An employee of an immigration center in western Germany, was injured on Thursday in a brutal knife attack, authorities said. The suspect, reportedly a young Syrian man, has been arrested.

The city administration in Wuppertal said in a statement that the incident took place on Thursday morning in the municipal House of Integration.

“Thanks to the immediate action of colleagues, the perpetrator was arrested and held until the police arrived. The employee received emergency medical attention and was taken to the hospital. The perpetrator’s motive is not known, now the investigation is in full swing,” the statement reads.

The city’s mayor said that he is “deeply shocked by this terrible attack” and wished the injured person a quick recovery.

“We will now do everything we can to ensure that all colleagues in the House of Integration receive the best possible support in the long term,” the mayor said.

The House of Integration will remain closed until Friday and specialists are now providing psychological support for the employees, city authorities said. 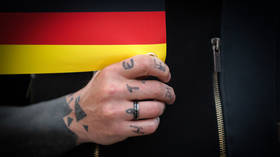 Police later provided additional details, saying that the victim is 25 and remains in hospital. They said the operation in response to the incident involved “a high number of officers” and that an “extensive investigation” is ongoing.

According to Bild, citing its own sources, the suspect who is believed to be a 20-year-old Syrian man, rushed into the immigration center building just before 9 am, jumped over the reception desk and stabbed a female employee several times. The victim’s injuries are considered to be serious but not life threatening, according to the outlet’s information.

A report by the Federal Criminal Police Office on “crime in the context of immigration,” revealed that the number of crimes against Germans by immigrants is significantly higher than crimes against immigrants by Germans.

Of the 83,426 victims involving suspected immigrants, 40,593 were Germans. The same year, 11,107 immigrants became subjects of crimes “involving at least one German,” the report said.

An “immigrant” is defined in the report as an “asylum seeker,” a “person entitled to protection and entitled to asylum, referred to as refugees,” as well as an illegal migrant. All suspects who have German citizenship have been counted in the paper as Germans.

According to OSCE figures, the number of hate crimes in Germany has been growing annually since 2016. In 2020, the tally of victims exceeded 10,000.