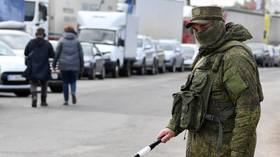 “All governing bodies are now located there,” Fomin said. Genichesk sits roughly 200km (124 miles) to the south of Kherson, on the coast of the Sea of Azov and to the northeast of Crimea.

General Sergey Surovikin, the commander of Russian forces in Ukraine, said Moscow wanted to prevent the needless deaths of soldiers and civilians. He cited a concern that Ukrainian forces could cause a flood by destroying a hydroelectric dam.

According to the Defense Ministry, more than 30,000 Russian soldiers moved to the eastern bank of the Dnieper River and took up defensive positions there, while more than 115,000 civilians were relocated from Kherson and the surrounding area.

Kherson Region was seized by Russian forces shortly after Moscow launched its military operation in the neighboring country in late February.

The region, together with three other former Ukrainian territories, joined Russia after holding a referendum in September. Kremlin spokesman Dmitry Peskov said on Friday that Kherson Region remains a part of Russia despite the withdrawal of troops from Kherson itself.