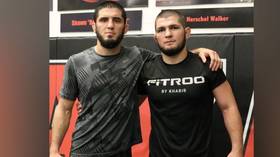 Khabib Nurmagomedov says his friend and training partner Islam Makhachev is destined for the very top, and predicts that the Russian fighter would dethrone the now-former UFC champion Charles Oliveira inside three rounds if and when they meet in the Octagon.

Oliveira enhanced his already stellar reputation last weekend in Phoenix at UFC 274 when he submitted two-time title challenger (and former Nurmagomedov victim) Justin Gaethje in the first round of their main event fight.

However, despite what is now an 11-fight win streak in the UFC's talent-rich lightweight division, Oliveira was stripped of his world title on the eve of the fight after coming in a half-pound over the lightweight championship requirement at the weigh-in. 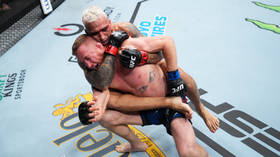 UFC officials confirmed afterwards that Oliveira is considered to be the top contender at lightweight and will take on another fighter yet to be confirmed for the vacant world title at a later date.

But despite Oliveira's recent streak which has seen him defeat Gaethje, Dustin Poirier, Michael Chandler and Tony Ferguson (among several others), Khabib says that if he runs into Makhachev in his next fight, there can be only one winner.

“My prediction is a maximum three rounds, no matter how good he is, Islam is better than him,” Nurmagomedov wrote on his Instagram page.

Makhachev has been heralded as the true successor to Khabib in the UFC lightweight division after the undefeated star decided to retire from active competition last year.

He has won ten straight fights at 155lbs, just one shy of Oliveira's current hot streak and was due to face top contender Beneil Dariush in February before Dariush suffered an injury in training the week before the bout.

However, it has been suggested that Makhachev has fallen out of favor with UFC boss Dana White for refusing a short notice bout with Rafael Dos Anjos after his Dariush fight was cancelled.

Makhachev has clearly been positioning himself for a world title shot online, and has slammed Oliveira for talking up potential big money fights with the likes of Conor McGregor or Nate Diaz.

“It's funny you're calling out Nate Diaz who hasn't won a fight in five years and at the same time saying I have to earn something. Just say it, you're scared to lose. Your jiu jitsu won't work in our fight and you know that,” Makhachev wrote online.

“I think the reality is, Makhachev has to fight Dariush first,” he said to Trocacao Franca.

“They both have to fight and then we’ll see who we’re fighting or not. Makhachev is super tough and deserves all the respect in the world. Dariush is also super tough and has a great team.

“Everyone I beat, I’ve made it pretty clear. I never let it go the distance, I always finish them. Makhachev and Dariush are the two guys I haven’t fought yet and they both have to make this fight happen. Maybe [the next contender] comes from this fight. The thing is, it makes no difference to me. I’ll be ready. The champion’s name is Charles Oliveira.”