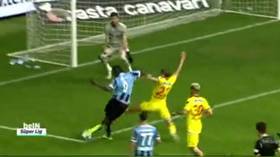 Ex-Man City and Liverpool striker Mario Balotelli has a reputation for producing spectacular goals, but even by his lofty standards a stunning strike he scored while playing for Turkish club Adana Demirspor on Sunday might just be his best – and certainly most viral – yet.

The Italian forward has had something of a nomadic career, playing for a range of teams in his native Italy, England and France but landed in Turkey last year where he has so far plundered 19 goals in his 33 appearances to date.

None, though, have been quite as breathtaking as one he scored in his side's 7-0 thrashing of Goztepe on Sunday.

The incredibly entertaining Balotelli made a mockery of the opposition defense, dribbling into the penalty area and producing at least seven stepovers along the way – before showing off his agility and keen eye for goal with a 'rabona' strike which flummoxed the goalkeeper who was helpless to stop the ball from landing in his bottom right corner.

Even more amazingly, the strike was one of FIVE that Balotelli produced in the game.

The goal was a reminder of the sheer talent that Balotelli, now 31, has shown throughout his career, and which convinced the likes of Inter Milan, Man City, Liverpool and AC Milan to attempt to harness his creative instincts in their first teams.

However, the controversial Balotelli could never quite seem to land in a situation which suited both him and the club he was playing for, particularly after becoming involved in a series of controversial incidents throughout his career.

He was once described by Jose Mourinho as “unmanageable”, while later drawing headlines for throwing darts at a youth team player.

He even shot back at media coverage surrounding him in Italy by displaying a sign which read 'Why always me?' after scoring a goal for Manchester City.

“Filth,” wrote BBC pundit and former player Gary Lineker in response to the goal, while for once his frequent social media sparring partner, Piers Morgan, agreed.

“Got to love him,” added Morgan, along with a string of laughing emojis.