Israel exonerates itself in shooting death of Palestinian journalist

An IDF probe claimed it didn’t mean to kill an al-Jazeera journalist, though the US State Department wasn’t so sure 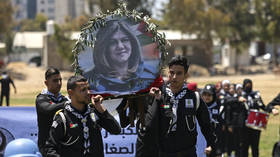 The Israeli Defense Forces has concluded there is no way its soldiers “deliberately” fired at Palestinian al-Jazeera journalist Shireen Abu Akleh, who was shot and killed on May 11 while covering an Israel Defense Forces (IDF) raid on the Palestinian city of Jenin in the West Bank. The Israeli military claimed it had assembled a multidisciplinary task force to “reconstruct and model the circumstances of the incident as accurately as possible” in an IDF statement issued on Monday.

However, the Israeli statement seemingly contradicted the conclusions of the US State Department, which found the IDF had likely killed Abu Akleh “unintentionally” but argued there was no way to be sure of the gunman’s intention. State Department spokesman Ned Price confirmed that “gunfire from IDF positions was likely responsible for the death of Shireen Abu Akleh.” 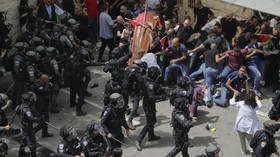 Washington’s investigators had conducted a ballistic analysis which found the bullet too “badly damaged” to reach a “clear conclusion.” Their evaluation of IDF and Palestinian Authority (PA) investigations led them to reach the conclusion that Israeli gunfire had killed the journalist.

When the PA refused to allow Israel to examine the bullet that killed Abu Akleh, reasoning that the country had an abysmal record of investigating shootings of Palestinians by Israelis due to an inherent conflict of interest, the US stepped up to examine the bullet instead. However, Israel retained custody of the rifle determined to have fired the bullet.

An apparent compromise was reached by which the US Security Coordinator (USSC) for Israel and the Palestinian Authority received the bullet from the Palestinians and conducted the ballistic examination in Israel. However, Israeli experts were the ones to “determine the connection between the bullet and the weapon from which it was fired,” according to the IDF statement. While representatives from the USSC were allegedly present throughout the entire process, it was not clear whether the PA had been given the opportunity to sign off on allowing the Israelis the key role in the probe, given their previous opposition to allowing them access to the bullet.

With a visit by US President Joe Biden to Israel and the West Bank less than two weeks away, Price was careful to qualify the State Department’s conclusions by suggesting that the USSC found no reason to believe the shooting had been intentional, “but rather the result of tragic circumstances during an IDF-led military operation against factions of Palestinian Islamic Jihad.”

The journalist’s family was disgusted by the US’ refusal to condemn Israel, declaring they were “incredulous” regarding the supposedly inconclusive results given the many eyewitness accounts of the shooting. They also demanded to know the extent to which US funds “were involved” in her killing.

“To say that this investigation, with its total lack of transparency, undefined goals and support for Israel’s overall position is a disappointment would be an understatement,” they said in a statement posted to Twitter on Monday.

“The truth is that the Israeli military killed Shireen according to policies that view all Palestinians – civilian, press or otherwise – as legitimate targets,” the statement read, accusing the US probe of “parsing over barely-relevant details and then assuming good faith on behalf of a recalcitrant and hostile occupying power.” The family vowed to seek justice from the United Nations and International Criminal Court instead.