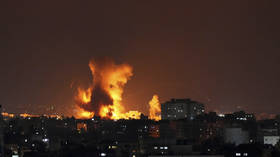 Israeli Defense Minister Benny Gantz held a phone conversation with his American counterpart Lloyd Austin on Friday night to update him on the objectives and progress of the ongoing military offensive in the Gaza strip, dubbed ‘Operation Breaking Dawn.’ While the IDF claims it took out senior terrorists, Palestinian officials say dozens of civilians were killed or injured.

“Minister Gantz emphasized that the State of Israel is working to defend its citizens, and will operate decisively and with as great precision as possible against terror operatives and infrastructure in order to reach its objectives,” Gantz’s office said in statement about the call.

Palestinian officials say that at least 10 civilians were killed in the strikes, among them a five-year-old girl. Another 55 were reported injured.

In retaliation, Palestinian militants fired dozens of rockets at Israel, warning that a wider offensive would follow. Air raid sirens could be heard across southern Israel for hours, as air defenses were activated to intercept incoming projectiles. 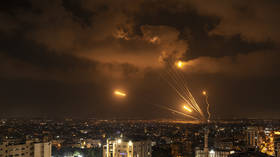 Gantz previously announced that he had authorized the call-up of some 25,000 reservists, while IDF spokesman Ron Kochav told Channel 12 that the operation against PIJ would “take a long time.” In his own address to the nation on Friday evening, Prime Minister Yair Lapid used similar terms, saying that the battle “will take as long as it takes.”

“Israel will not sit idly by when there are those who are trying to harm its civilians,” Lapid stated. “This government has a zero-tolerance policy for any attempted attacks – of any kind – from Gaza toward Israeli territory.”

The latest escalation began when Israeli forces arrested PIJ’s West Bank leader, Bassem Saadi, in the city of Jenin on Monday. A Palestinian teenager was killed in the raid on Saadi’s home, triggering outcry across the Palestinian territories. As the PIJ placed its fighters on high alert, Israeli officials repeatedly warned this week of impending revenge attacks.