If the Palestinian Islamic Jihad accepts the deal, the latest round of fighting that began on Friday will end with a ceasefire 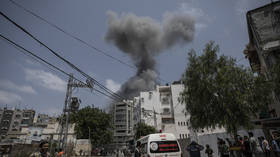 Israel agreed on Sunday to an Egyptian-brokered truce in Gaza, Reuters reported. It remains unclear whether the Palestinian Islamic Jihad (PIJ) will accept the deal. The group continued to fire rockets into Israel as the news broke.

Egypt has “made contacts with everyone” to defuse the rapidly-escalating conflict between Israel and the PIJ, Egyptian President Abdel Fattah al-Sisi said on Saturday, as an intelligence delegation from Cairo arrived in Israel.

Egyptian sources told Reuters on Sunday that the delegation had proposed a ceasefire beginning later in the evening, which the Israeli side agreed to. If the report is true, the PIJ’s leadership must now decide whether to accept the truce.

A source within the militant group told AFP that it is participating in ceasefire talks.

The PIJ stepped up its rocket attacks on Israel early Sunday afternoon, with air raid sirens sounding in Ashkelon and other settlements near the Jewish state’s border with Gaza, and some projectiles threatening the city of Beersheba. The Israel Defense Forces (IDF) claimed that the Iron Dome missile defense system intercepted 97% of the roughly 500 rockets that made it out of Gaza over two days of fighting.

Israel targeted what it said were PIJ “rocket launch posts” in Gaza in response, posting video footage of airstrikes on these positions.

Israel has described its strikes as “targeted,” and said that Operation Breaking Dawn was launched amid the imminent threat of attack from the PIJ following the arrest of the group’s leader on Monday. However, Palestinian officials say that 31 people have been killed in Gaza – among them six children – while 265 Gazans have been wounded. 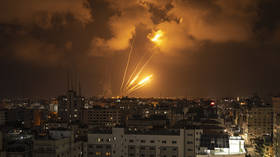 Israel has denied responsibility for at least nine of these deaths, which the IDF blamed on a Palestinian rocket that fell short after launch.

With several of its senior leaders killed or arrested, it is unclear whether the PIJ intends to agree to the Egyptian-brokered truce. A spokesman for the group claimed on Sunday that the militants had used “only a small part” of their capabilities, and called on Palestinians in the West Bank to join their offensive. Hamas, the largest Palestinian militant group, has thus far stayed out of the current round of fighting.

Before news of the potential truce broke, Israeli Intelligence Minister Elazar Stern told Army Radio that Israel has “made very significant achievements in the operation,” and that the IDF would “continue to respond” to rocket attacks. However, Stern said that “if [the PIJ] requests a deal… we aren’t seeking war.”