Injured troops to be evacuated from Azovstal – Moscow

Evacuation from the Mariupol stronghold to a Donbass city agreed, Russian military said 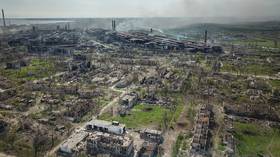 Russian and allied troops blocking the Azovstal steelworks in Mariupol will allow injured Ukrainian soldiers to leave the stronghold and go to hospital in Novoazovsk, the Russian defense ministry said on Monday. The evacuation is planned for later on Monday after an agreement was reached, the military said.

According to the Russian ministry, it has suspended hostilities at Azovstal to allow the humanitarian evacuation later in the day.

Novoazovsk is a small city about 40km east of Mariupol, which is controlled by the militia force of the Donetsk People’s Republic. The evacuated troops will apparently remain in the custody of the breakaway republic, which Russia recognized as an independent state before launching its attack against Ukraine in late February. 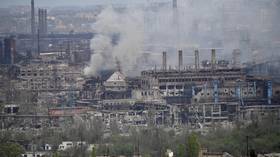 Azovstal serves as the last bastion of Ukrainian troops in Mariupol, a major port city that saw some of the most intense fighting during Russia’s offensive in Ukraine. The vast facility has an extensive network of underground tunnels and shelters, where Ukrainian fighters are holed up.

Russia decided not to storm the site, saying it would take too many lives of its soldiers, and opted for a prolonged siege instead. Ukrainian troops stationed there, many of whom belong to the controversial nationalist Azov battalion, have been complaining about a shortage of food, medical supplies and ammunition for weeks.

Russia attacked the neighboring state in late February, following Ukraine’s failure to implement the terms of the Minsk agreements, first signed in 2014, and Moscow’s eventual recognition of the Donbass republics of Donetsk and Lugansk.

The German- and French-brokered protocols were designed to give the breakaway regions special status within the Ukrainian state.The Kremlin has since demanded that Ukraine officially declare itself a neutral country that will never join the US-led NATO military bloc. Kiev insists the Russian offensive was completely unprovoked and has denied claims it was planning to retake the two republics by force.